I’m lucky enough to live just a two hour drive from the Windy City. While I love the museums, the coast of Lake Michigan, fine dining and the nightlife, I’ve also found Chicago to be my ultimate girls getaway for luxurious hotels, spa and delicious food. What more could a gal want with her pals?

The Palmer House Hilton is the grand dame of Chicago hotels. It was built in the late 19th century and though it tragically burned down in the Great Chicago fire, it was quickly rebuilt and officially opened for good in November 1873.

Every time I walk through the lobby of this hotel my mouth drops. The ceiling reminds me of the Sistine Chapel and the architecture is just as grand. The halls are filled with photos of greats who have visited and performed there, including presidents and stars. 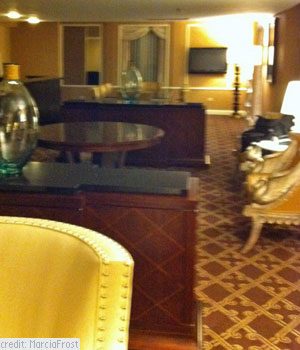 My friend Lisa and I were lucky enough to stay in one of those suites made for royalty, with a dining room and living room ready to house the Supreme Court. With the room came access to a well-appointed executive lounge, though the breakfast in the Lockwood Restaurant is one not to be missed.

The other thing you don’t want to miss at the Palmer House Hilton’s Lockwood Restaurant is the Afternoon Tea. Your selection of tea is accompanied with traditional English finger sandwiches, such as egg salad, cucumber and watercress (my favorite), smoked salmon and chicken salad. Then there are the pastries, tarts and petit four, all of which are delicious. We also indulged in the addition of champagne with our tea to toast our trip.

It was a completely different atmosphere for the next Chicago getaway with my friend Cortney. The Trump International Hotel is contemporary luxury on the riverfront. The rooms are well-appointed, but instead of old charm, you’ll find new “Bling” water in your room (at a price, of course).

We were lucky enough to be housed in one of the Spa Rooms. This is a girls getaway dream. You don’t even have to get out of your (very comfy) robe to walk into the spa from these rooms. You’ll also love the bath salts, lotions and warm neck compresses for total relaxation at any time.

Trump guests have use of the fitness center, indoor pool and spa facilities, all of which overlook the Chicago skyline with floor to ceiling windows. We also took advantage of the sauna and steam room. Before heading into these we slathered on the complimentary lotions and gels to sooth the skin and body.

I also indulged in two of the Spa at Trump’s signature treatments, the Crystal Devine Foot Treatment and the Bio Pearl Hand Treatment. I did feel positively ‘devine’ by the time I left for the room to get ready for the evening. 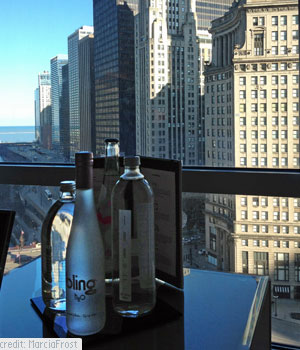 Cortney and I enjoyed drinks at Trump’s Rebar, savoring the infused ice cubes that they started using there in honor of the year of herb drinks (something I am very much in favor of. One drink that I was really a fan of is called the Trump Ransom and is made from Ransom Gin, Peach Circoc Vodka, rosemary-infused simple syrup and Blood Orange San Pelligrino.

The Terrace at Trump has incredible window seating, but weather permitting, you can go out on the Terrace and take in the breathtaking views of Chicago’s famous architecture and Navy Pier.

While up at The Terrace at Trump, sample some of their small plate dishes or large seafood plates, which come in options as extravagant as the $295 “Indulge the Penthouse,” with two Maine lobsters, an eight oz Alaskan King Crab Leg, one dozen colossal shrimp, 18 oysters, yellowfin tuna tartare and a Caribbean crab cocktail. It’s said to feed 5-6 people, but it has been known to be shared by two.

We stuck with a delicious Salwich, made from fried eggplant, Burrata cheese, pepper, tomato compote, smoked aioli, pesto and arugula with a balsamic reduction. It was served to perfection on a grilled polenta.

Also not to be missed are the Terrace Sliders. These Wagyu beef burgers are topped with cheddar and house made ketchup.

Needless to say, after an evening of eating and drinking, those bath salts in the oversized tub of our spa room came in handy – right before we put on the neck wraps and drifted off to sleep.

After many years as one of the top tennis writers in the country, Marcia Frost now devoting most of her time to travel writing, with a focus on food, wine and spirits. She has her own blog at WineAndSpiritsTravel.com and does weekly columns for Inspirato on Sonoma and Paris (two locations she visits often). Marcia also freelances for many other outlets, including Yahoo!; AOL; Michigan Avenue; Rum Bum; Los Angeles Confidential; Travel, Food & Drink; and Air Tran’s Go! Magazine. She has been contributing to Girls’ Getaway since 2010. For more information on Marcia, visit her website MarciaFrost.com. 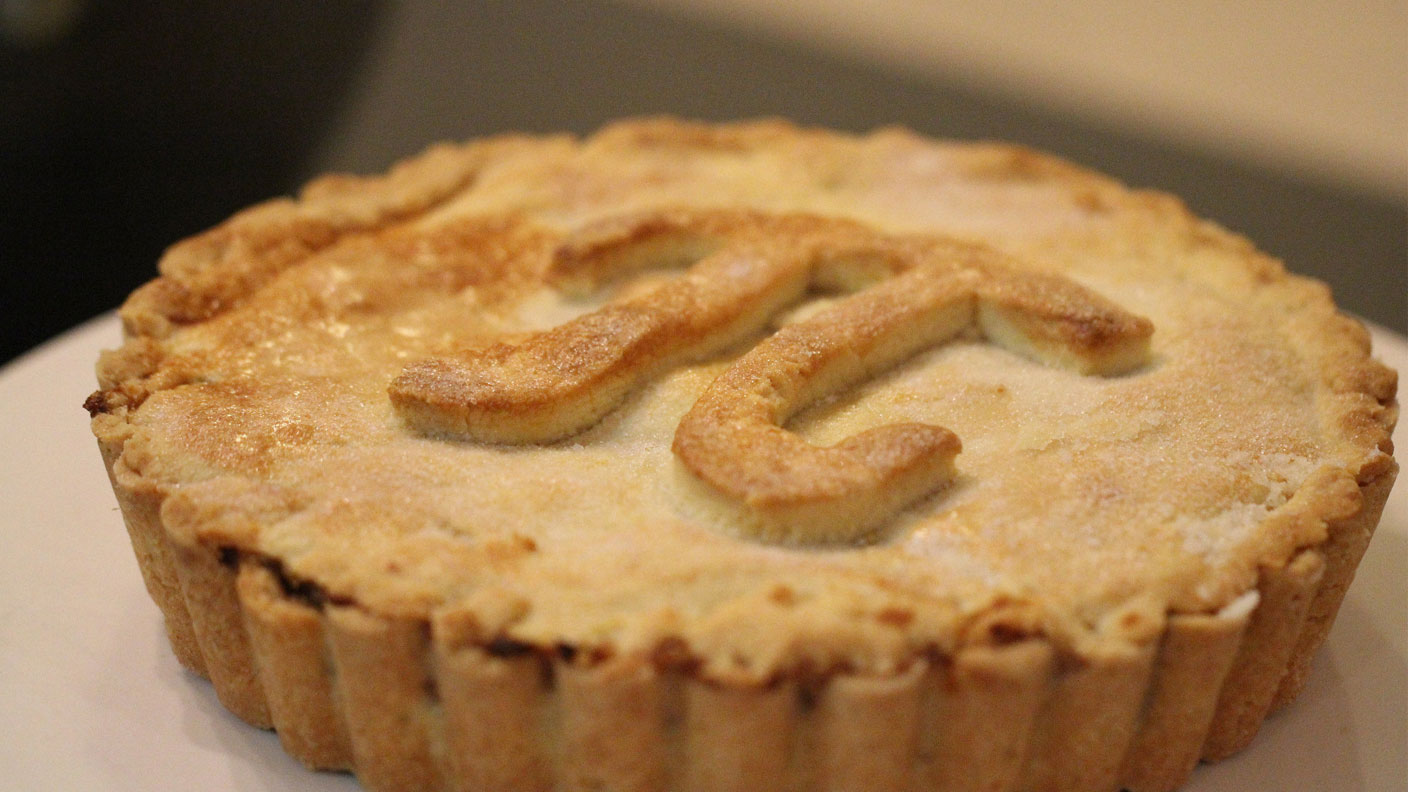 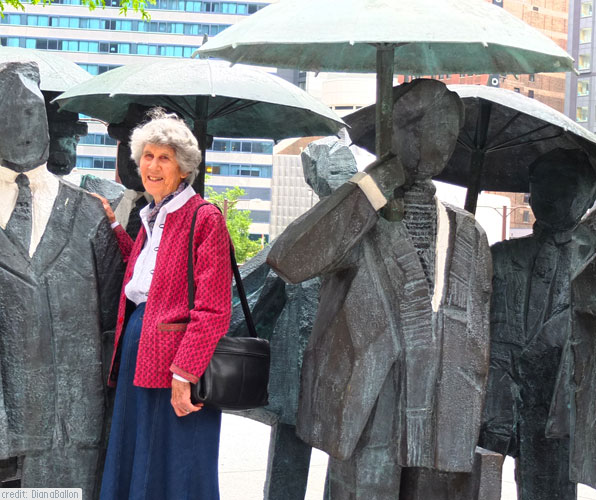 A Whirlwind Weekend in Chicago 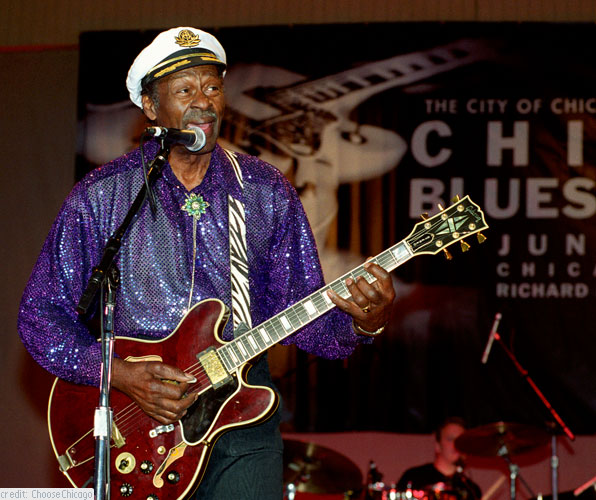 A Cultured Girlfriend Getaway in Chicago