When asked if I wanted to take a trapeze class while on a girls getaway to Sarasota Florida, without hesitation or really even much thought, I exclaimed “Yes!” What could be more fun than flying through the air, ideally with grace and strength? I recruited my friends Dawn and Robin (my adventurous partners in crime: see What Happens in Vegas…). Circus Sarasota offers a few different circus-type classes, and we were quick to sign up.

First, we took the Aerial Gym class. The description read that hoops are used, suspended about two or three feet off the ground. We thought the class sounded fun – we just didn’t realize how hard it would be! The five us in the class used the steel hoops as support in various Pilates- and yoga-type moves – plank, bridge, even downward facing dog. The most fun, though, was when we balanced our chests on the hoops, used our arms for leverage and swung, swan-like (maybe?!), through the air. My favorite move of the class, though, was (Wo)Man in the Moon – we balanced on our thin steel hoops, bending and shaping our bodies until we conformed to the hoop’s curve. In the pose, I felt graceful and limber – all I needed was a sparkly outfit and I would’ve been set! 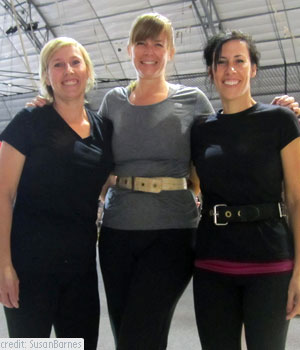 Having had our first taste of the circus, Dawn, Robin and I decided in no time flat we’d be back, but this time we wanted to swing high above the ground, trapeze-style!

On a Sunday afternoon, we joined a group of four other thrill-seekers – a boy, a girl, a woman older than us, and a mother-daughter duo celebrating a birthday. Of the group, the boy, Owen, had “trapezed” (is that a word?!) before, and the daughter of the mother-daughter duo had been in the Sailor Circus, or circus for kids, but hadn’t “trapezed.”

Our three instructors – Brandon, Emily and Keith – were all circus veterans, and were incredibly patient with us as we slowly made our way through the stations.

First, after some really good stretching, we each took a turn swinging from a trapeze not far off the ground, to get the feel of swinging back and forth. Essentially, when going forward, legs go out at a (hopefully) 90-degree angle, and then swing back as you go back – definitely used for propulsion. “Kick front – back – front – back… and hang,” Brandon called out. 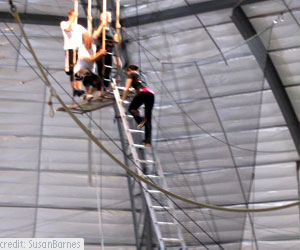 Next up, the trampoline.

Now, I don’t even know the last time I was on a trampoline (but I was on a bounce pillow in the fall – FUN!), and I didn’t think it could be that hard. Wow, was I wrong! Again, we each took a turn, and that trampoline had bounce! Up on the trampoline, we worked on familiarizing ourselves with the feel of bouncing, essentially taking small bounces while our hands did the wax-on, wax-off move from “Karate Kid” to keep balance. Challenging.

Step two on the trampoline was learning to fall – legs again kicked out at 90 degrees – and bounce back up into a standing position. This move was intended to train us for falling from the trapeze onto the net below. Sounds easy, right? It’s not! Our fellow students – Owen and the young girl – did it, no problem. The benefit of being young, I guess, and not overthinking everything! We “more mature” students had problems. We couldn’t get the notion of kicking our legs out, bouncing on our behinds, and coming back up into standing. It took us all several times – or maybe a bit more – to get it, but eventually we all did, and Emily and Brandon’s patience was certainly helpful!

Owen couldn’t wait to scale the fully-extended extension ladder. He crawled right up as we all looked on in, amazed. At the top, on a small, acrylic platform – I think it was about the size of a snowboard, but it must’ve been bigger! – Brandon and Keith hooked Owen into the two lines that would keep him (and us!) safe, and whoosh – he went flying in the air. So graceful!

And so was the process as we each climbed up, up, up to the platform, one at a time.

And then it was our turn. Robin went first. Then Dawn. Then me. 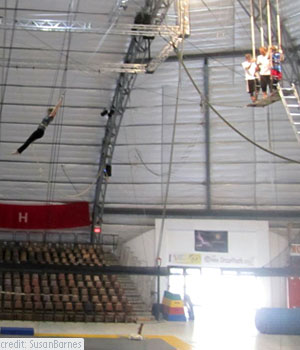 Standing high above the ground, I wasn’t really nervous. Just excited. I got hooked in. Brandon told me just what was going to happen. I chalked my hands a la Lebron James. Brandon held onto my belt, holding me on the platform as I reached out and grabbed for the trapeze. Is that trapeze heavy!

“On the count of three, you’re going to jump off, ok?” said Brandon.

And I stood there.

“OK, this time, on three, take a little hop and jump off.”

“Kick front. Back. Front. Back.” I heard Emily call from the ground.

I was doing it! I was on the trapeze! I was flying through the air, full of grace and strength!

“Kick front. Back. Front. Back.” After another time or two, I heard, “And hang.”

It was time to fall to the net, using the technique that we’d practiced, with the help of Emily, who was holding tight to the lines to help gently lowered us.

My first fall was perfect – just as we’d been taught. I crawled to the edge of the net, grasped the side and flipped to the mat below for the dismount. Hooray!

We each had the opportunity to trapeze three times, and I took advantage each time. It was just so much fun, if not challenging with lots of great core and arm work! The scariest part of the trapeze, according to Dawn, Robin and myself? Climbing the ladder to get to the platform!

After two hours, our class came to an end. We were all exhilarated, thrilled and pleased with ourselves – we’d done it!

For the week that followed, I couldn’t believe how much I felt the muscles that had been worked in my upper abs. I mean, it felt like I did a thousand hard-core sit ups! It felt great!

I know I for one can’t wait to run away to the circus again!

If you’re thinking about adding a ‘circus act’ on your next Florida girlfriend getaway visit the Circus Sarasota website to find a complete list of all current classes.

Flying High in Sarasota from travlin_girl on Vimeo.

5 thoughts on “Let’s Run Away to the Circus!”

Florida Fun in Sarasota and the Keys