You may have heard about a little golf tournament held each spring in Augusta, Georgia, set amidst azaleas blooming in all their glory and impeccably-manicured greens. Well, let me tell you, there’s more to the Garden City than tees and links. My college roommate Nikki and I had a chance to spend a few days in Augusta, and found not only a lot of outdoor activities to fill the daylight hours, but tempting restaurants and energizing pubs once the sun set. 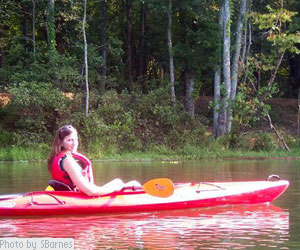 We started our getaway with a two-or-so-hour kayak paddle down the historic Augusta Canal, Georgia’s first National Heritage Area. The serene scene was filled with the soft sounds of the water beneath our oars, faint conversations of those walking along the trail that hugs the canal, and the occasional flutter of wings of heron flying by. What a beautiful, tranquil way to start a day.

Next up, a different mode of transportation all together. We donned jeans and helmets and mounted our horses for a 13-mile trail ride through pine forests and the hills of Fort Gordon. Though a military installation, Fort Gordon’s stables are open to the public, and guided rides are available. Mornings tend to be better, before the heat and humidity of the day really set in. 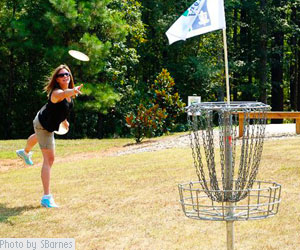 Augusta is, of course, known as the home of the Masters Golf Tournament, but there’s a different type of golf that’s gaining in popularity all across the country. Disc, of Frisbee, golf is perfect for all ages and abilities. Disc golf is a serious game, but it’s a little hard to take yourself serious when flinging a Frisbee towards a hoop yards away. Give it a try – you may just discover a new sport to get into once you return home! The Augusta Disc Golf Association is a terrific place to find out more, not to mention home of the Disc Golf Hall of Fame.

However you spend your day, when night falls, there are plenty of places to dine or simply grab a drink. You may not think of Augusta as having incredible Mexican food, but you’d be surprised. Make your way to Rooster’s Beak and prepare to be wowed. While looking over the fun menu, sip a house specialty drink like the Hola, Holmes (espresso vodka, Kahlua, Irish cream and milk), or The Cartel (house cilantro-infused vodka, Bloody Mary mix and a dash of housemade Macho Sauce). Nikki liked her Singing Bush Sangria (house red wine, coconut rum, hibiscus juice and fresh citrus), and I had a few Fly-Jitos (Firefly vodka, lemon, crushed mint and gingerale).

cheese, cilantro and cotija cheese. You can add bacon, house made chorizo, a combo of chicken-beef-pork, or shrimp, if you’d like.

The Large Plates on the menu will certainly fill you up. If you’re hungry, try Rooster’s take on shrimp and grits: a sautéed shrimp cake, fried tomato, yellow grits, poblanos corn cream sauce and jalapeno gastrique. If you’re not as hungry, choose from the variety of tacos, including Benton’s BLT (bacon, lettuce, grilled tomatoes and chili-lime mayo), Pork “Al Pastor” (spice rubbed pulled pork and grilled pineapple salsa), or the Berlin, my personal fave (all veggie taco with roasted cauliflower, green peppers, potatoes and pumpkin seeds).

At the end of your meal, though, you have to try the homemade ice cream. Rooster’s Beak features unique flavors alongside classics, and the offerings choose regularly. When we were there, we tried the Cheez-It ice cream. Yes, Cheez-It. It actually wasn’t as odd as I thought it’d be! I couldn’t eat an entire scoop, but a taste… 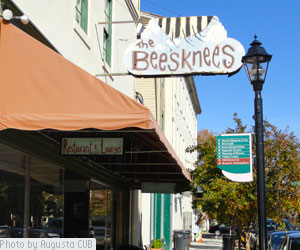 If you want to nibble from a few plates, try The Bee’s Knees. Nikki and I loved the eclectic menu, and tried several of the delicious tapas, including Spicy Louisiana Crabcakes, Pan Seared Scallops and Smoked Gouda Nachos with black beans, tomatoes, scallions, jalapeno, sriracha sour cream and fresh cilantro; we topped ours with shrimp and crab, but chicken is an option, too. Delish! For larger appetites, there are “big tapas” on the menu, too, including Pad Thai, Coconut Curry Panang and a Soy-Ginger Tuna Steak.

Walking through downtown after dark, we heard plenty of live music spilling out of the pubs along Broad Street. Nikki and I wound up the Still Water Tap Room. Though some refer to it as a local dive bar, we loved the laid back, welcoming atmosphere and had a blast!

During our stay in Augusta, Nikki and I called the Marriott Augusta Hotel & Suites home. The Marriott is ideally situated on Augusta’s RiverWalk and overlooks the Savannah River. We started our days in Augusta with a walk along the river, mere steps from our hotel room’s door! And when the nights ended, our room was a glorious space to recharge and ready for our next days.

Though Augusta is most well-known for its golf tournament each spring, the city does have much more to offer. Take some time to explore the area, and have a masters-ful getaway for yourselves!

Susan B. Barnes is a travel writer and photographer. A proud Army brat, she was born on a military base in Belgium and has been on the go ever since. While Susan has traveled across the United States and into Canada, she has also managed to visit such European cultural hot spots as Paris, London, Ireland, Athens and Rome, and has even explored the second largest reef in the world off the coast of Belize and the cloud forest of Venezuela, among many other exotic locales. Having learned to rock climb in Yosemite National Park, surf in La Jolla and swim with whale sharks in Mexico, she’s always looking forward to her next adventure.

One thought on “Augusta Georgia: A Masters-ful Getaway”