“Check out the guy over there – isn’t he …” and my friend named a VERY famous Liverpool footballer. Sure enough, it was he who cannot be named, eating out eating with his perfectly-formed dining girl-friend (or wife … can’t tell the WAGS apart!) at one of Merseyside’s latest and most popular eateries, the Vincent Hotel, Southport. We were there for a birthday celebration and a touch of luxe. The hotel is very modern, opened in 2008 in the middle of one of the most elegant seaside towns in England. 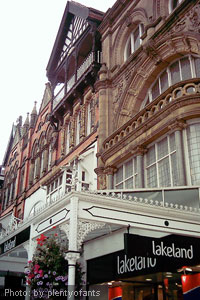 In the morning we had gone on a shopping spree along Lord Street – a tree-lined, colonnaded street with beautifully laid-out gardens. It’s known for its boutique-style shops and the beautiful Grade II listed Victorian Wayfarer’s Arcade with its fab designer shops, great coffee bar and the biggest second-hand bookshop in miles. I got a fab red leather bag and some sexy high-heeled patent shoes.

After a quick lunch at one of the many restaurants and bistros in town, we went for a wander along the promenade for a breath of fresh air. As we were quite tired from our morning’s retail therapy, we got on the dinky little train along the Pier, feeling like kids again. It goes over lovely lakes and gardens and eventually out to sea – only the tide was out and we were overlooking a huge beach – with cars driving along it. All along the pier are commemorative name plaques – donations for them helped to rebuild the pier after it burnt down. Look out for my Dad’s one –‘Barnacle Bill Dawes’!