The movie “Sex and the City 2” was set in Abu Dhabi but was actually filmed entirely in Morocco as Abu Dhabi refused to allow a film with the word “sex” in the title to be shot there. Dubai refused the film on the same grounds.

So read on before throwing your favorite bikini and skimpy party dress in your suitcase for your girls’ getaway to the Middle East. It’s still the Middle East, not Hollywood or even Cleveland!

But relax, you will not need to cover your hair or drape an abaya over your body. You merely need to dress “modestly.” Sounds simple enough but what is “modest?” (Hint: Do not rely on any definition provided by Miley Cyrus or Kim Kardashian.)

Pack for Modest in the Middle East

Modest in the Middle East generally means loose pants, floor length skirts, and arms at least partially covered. Although this sounds, and is, somewhat restrictive it doesn’t need to mean frumpy or uncomfortable. Instead it can be an excuse to buy some new clothes!

I learned one day that although bare legs aren’t forbidden they are not viewed favorably – actually they’re viewed in amazement! I asked two women who lived in the UAE if my bare legs were a faux pas and they said “no” but the looks I got all day said “yes.” Go for the loose pants or long skirt if you don’t like to be gawked at.

When you see women working in the UAE and wearing Western clothes they never have bare legs. They wear thick, highly unattractive pantyhose. We were quite amused to find the pair of pantyhose shown here in our “amenity kit” in the St. Regis Abu Dhabi. Too bad I got those too late!

You also should not go overboard and decide that you’ll just blend in by getting an abaya and hijab. We were told that years ago that was seen as a well regarded attempt to not be culturally insensitive. Now it’s seen as being almost insulting as if you are trying to pass yourself off as someone you are not.

Be sure to check the weather for both temperature and wind speeds before you leave. We expected Abu Dhabi to be very hot but it was quite windy in February and we were frequently chilly.

Packing Hints for Women Traveling to the Middle East 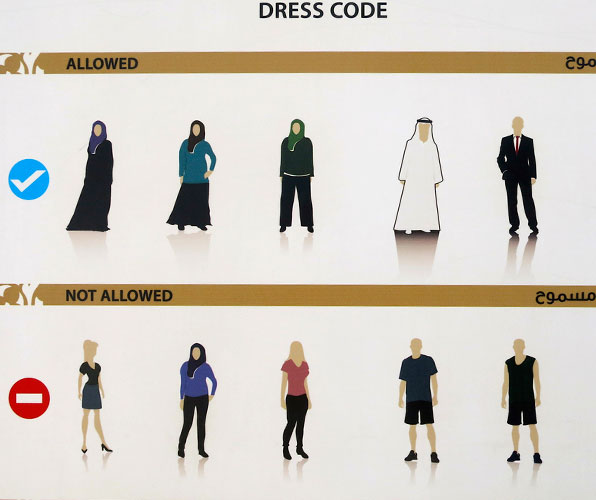 When you’re packing for a trip to the Middle East keep these things in mind:

1. Linen is your friend. It’s comfortable and gets looser as you wear it.

2. Summer-weight cashmerecan be very useful in the evenings

3. Pants should be loose, never tight, and you would look very out of place in jeans or any sort of tights.

4. Breathable fabrics are your friends as are light layers.

5. Wear any kind of shoes you want – there aren’t any footwear taboos

6. If you are going to go into any mosques the rules are much more restrictive and you will have to cover your whole body and all of your hair.

7. If you are staying at a Western resort you can take any bathing suit you wouldn’t feel weird wearing in front of your grandfather or boss. Have a cover-up that at least lives up to some of the “cover-up” name. (If you are not staying at a Western resort you may want to contact the property directly or reach out to people who have reviewed where you’re going to ask what is acceptable beach attire.)

Modest dress has some pluses so enjoy those! You won’t be trying to Photoshop muscle definition into your arms, be dismayed that you don’t have a professional dancer’s legs or need to wear Spanx.

You can just enjoy your girls’ getaway with your friends and the sights and activities in the Middle East – rather freeing in a way!

Kay Dougherty is the author of the travel blog BlondeBrunetteTravel. The blog is humorous, often irreverent, and is about Kay and her sister (The Brunette) traveling the world. You can also find Kay on Twitter at @BlBrTravel.