The trip to Mazatlan had been planned for quite awhile. My friend Theresa (aka The Local Tourist) and I were quite excited for our first girls’ getaway together. What better place to do it than a beach town on the Pacific Ocean? Unfortunately, the best laid plans don’t always work out and a family emergency at the last minute forced Theresa to cancel.

A girls’ getaway is not something that you want to do by yourself, and it’s no secret that there have been some issues with Mexico, so I will freely admit to being very nervous about taking this trip alone. I actually considered postponing when I couldn’t find another friend to go, but a lot of people had worked hard on my itinerary. They convinced me to go so that’s what I did – not knowing what to expect. 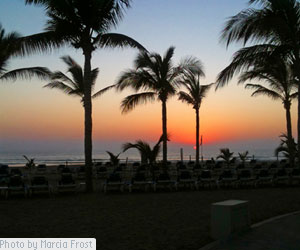 When I arrived in Mazatlan late at night, there was first a mix-up with my transportation and then some confusion at the hotel with a substitute desk clerk. By the time I woke up from very little sleep (I seemed to have the only room in the hotel facing the noisy street), I was seriously doubting my decision to come. I made a few phone calls and was assured things would get better so I agreed to stick it out, at least until I met my contact from the Mazatlan Hotel Association for breakfast.

Maria Elena Soltero happened to be on her first day on the job so, even though this was her home, she was also a bit out of her element. She quickly calmed my nerves and before I knew it we were fast friends. Between her (good) English and my (fair) Spanish, we chatted away and my girls’ getaway suddenly had a new partner. 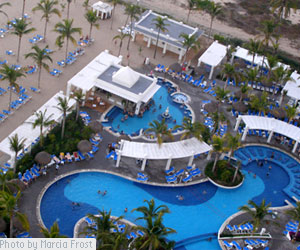 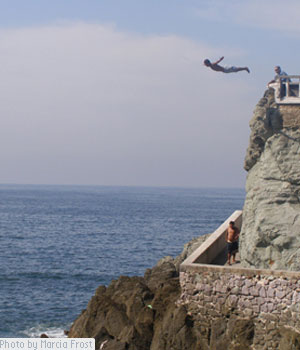 By the next day, I was at the brand new Riu Emerald Bay, an incredible all-inclusive that offered breathtaking views and suites to die for (how about a Jacuzzi next to the bed and another out on the balcony?!) We explored Old Mazatlan, watching everything from the cliff divers to the bustling crowds in the markets. Lunch was at the Shrimp Bucket, and though I am allergic to seafood, they made me feel welcome and prepared a safe meal for me. I even got my own handmade tortilla chips since the regular ones are fried with the shrimp.

After the tour we had dinner at La Casa Country, a sort of Tex Mex where I discovered Tortilla Soup, which comes with avocado, cheese and tortilla strips on the side. We then went to the Mexican Fiesta show at El Cid Castilla Beach Hotel and laughed as we snuck off to Rios Coffee Café for some late night chocolate desserts.

The next day we toured some of the many beautiful resorts along the Mazatlan beaches after breakfast at a local restaurant, La Terraza, where I had my first taste of corn tamales. They were delicious. Maria Elena and I had our own guide, Julio of Pronatours, to take us wherever we wanted to go and after looking at a half dozen places, it was Oceano Palace where we had a great lunch before heading back to the Riu for a little down time before dinner.

Dinner was at Señor Frogs and it erased all the memories of spring breakers doing belly shots that I had from Señor Frogs in Cancun. Don’t get me wrong, it’s a good thing to erase those memories when you are over 30! We had some adult fun with frozen mango drinks and tequila shots, but did bring out our inner child for marshmallow fights when prompted by the staff!

I had a good night’s sleep and Maria Elena and Julio picked me up in the morning for breakfast at Cenaduria La Regional, where she helped me pick out another authentic Mexican breakfast, this time Panqueqes, a rolled pancake covered with cinnamon and sugar, and Chilaquiles Rojas, which are fried tortilla squares in salsa and cheese. I was filled to the brim for the trip to the Mazatlan Aquarium, which is small enough to navigate in two hours.

The afternoon was the highlight of the girls’ getaway – three hours of spa treatments at Riu Emerald Bay’s Renova Spa! We enjoyed Mango-Passion Fruit scrubs and wraps, massages, and facials, relaxing with a glass of green tea between treatments. It was truly heavenly and I walked out of the spa in time to see the sunset setting over the beach. We headed down to Machado Plaza for a performance of “El Cascanueces” (“The Nutcracker”). After the ballet, we stayed in the plaza for dinner at Las Brasas, followed by drinks and Mexican Karaoke at El Mil Amores.

After a good old fashioned American omelet, I was off to Huana Coa to hear about the making of Los Osuna, the equivalent of tequila, but it can’t be called that since it’s not made in the town by that name. Then it was a Asado a la Plaza lunch at Panama before we enjoyed the Riu swim-up bar and beach, an Italian dinner at Vittore, and then drinks at Riu’s Martini Bar, one of the many nightlife options on the premises.

I spent my last day in Mazatlan at El Cid Castillo, where I had a private tennis lesson at the Country Club before Maria Elena and I had lunch and then took off on a catamaran to Deer Island, where the seagulls were the only other inhabitants. We worked up an appetite for some Hawaiian Pizza at El Cid’s pool bar and relaxed before a late taco dinner at Diego’s.

It was sad to say goodbye to Maria Elena, but we had a terrific time together and have stayed in touch. I’ve been asked many times since I’ve returned if I felt safe in Mazatlan and the answer is…. absolutely. This is a cruise port that is a nice mix of local flavor and incredible resorts on perfect beaches – all currently at great prices. I look forward to returning to mi amiga sometime soon.

Marcia Frost has her own blogs at WineAndSpiritsTravel.com and SpiritsTraveler. She also writes wine, spirits and travel for many other publications, including USA Today, Associated Content Yahoo!, Travel Roads, Air Tran’s Go! Magazine and Tennis Life. She makes regular contributions at Girls Getaway.