I’ve decided that I like to travel solo, especially when I have a short stay in a city. There is no need to compromise when faced with the dilemma of too many sites to see and too little time in which to see them. I alone can make the decision of what I really want to see and what can be left for the next visit.

On my recent trip to Berlin, Germany and on my first solo journey in years; I only had one and a half days to experience a city that has virtually reinvented itself since the fall of the Berlin Wall. I loved solitude of being alone, free to explore this city at will, my attention totally focused on the changes made and still being made in this new city called Berlin. 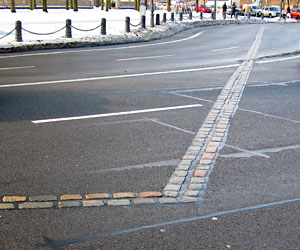 Berlin is a city transformed; with the fall of the Berlin Wall in 1989 the city healed the mortal wound that cleaved the city into two lesser halves for 28 long years, and paved the way for Berlin’s reunification. The city has evolved into a modern, gritty, cultural powerhouse eagerly moving into the future but also with an eye looking back into the shadows of its past.

The best way to witness Berlin’s transformation and to understand the historical context behind it is with a walking tour of the city. I took a Discover Berlin tour with Berlin Walks, which covered the important sights in the city center:

It’s hard to imagine that we are now able to stand within a few feet of what was a symbol of oppression in Eastern Europe for many years. I lived with my family on a Germany military base in the late 1960’s and coming back to a unified Germany was a surreal, emotional experience. I stood in awe, looking at this small portion of the remaining wall, now in the midst of a bustling city, people wandering about taking photos, something that would have been impossible to do just a little over twenty years ago. 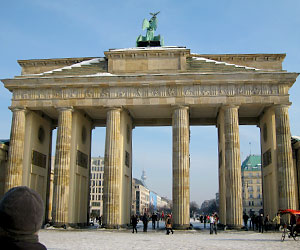 Brandenburg Gate, Berlin’s only remaining city gate, stands at the end of Unter den Linden, one of the grandest streets and pedestrian thoroughfares in Berlin. During the Cold War, the gate was incorporated with the Berlin Wall and it came to symbolize the division (then reunification) of Germany. Brandenburg Gate sits on the edge of Pariser Platz, a large pedestrian square that is usually crowded with tourists. This is also the location, we were told by our tour guide, of Hotel Adion, where Michael Jackson once dangled his baby out of the window.

In 1999 construction workers stumbled across the remains of Hitler’s Bunker, while laying foundations for a new government building. The site today is a lonely, desolate spot in the middle of a parking lot, a fitting ending for such an evil place.

The Monument to the Murdered Jews of Europe

Architect Peter Eisenman’s Monument to the Murdered Jews of Europe is a field of 2,700 grey concrete blocks designed to look like tombstones and coffins. As I walked through narrow pathways of featureless slabs of stone alone, I thought this is what Eisenman wanted us to do, quietly think about the victims and the atrocities that occurred during the holocaust without the distraction of inscriptions, signs or walls of information. 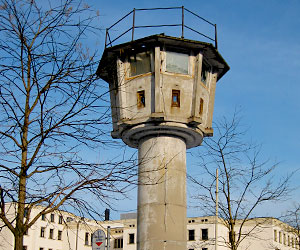 This monument is one of the most popular tourist attractions in Berlin, the funny thing is that none of what we are seeing is real, it’s all fake – the original checkpoint was relocated in 1990 and is now at the Allied Museum. The guardhouse is a copy of what the first guardhouse would have looked like when the wall first went up in 1961. The sign that reads ‘You are now leaving the American sector’ in English, Russian, German and French is also a replica. But this really doesn’t matter, we all loved it, snapping photos and drinking in the history behind the façade of reality.

After the tour I desperately needed a break from delving into Berlin’s past and headed over to KaDeWe (Kaufhaus des Westens) Europe’s largest department store.

The top floor of the store has a winter garden and restaurant, a perfect place to relax and enjoy views though the huge glass walls overlooking Wittenbergplatz. KaDeWe is most famous for its enormous food hall on the sixth floor, made up of sensational little stores divided into themed sections, such as champagne bars, truffles and sweets, fresh meat, fish, wurst (or sausages), and wines. I stocked up on mountains of chocolate and headed back to my hotel tired but happy.

I experienced the city on my own terms and loved being able to make my own decisions on my first solo trip in twenty years. The city gave to me what itself had just experienced, a rebirth of confidence and resilience.