Let me tell you a funny, little story about how I discovered I had a (never used before or since): “I’m gonna die” whimper and the six travel safety lessons I learned from my ‘near death’ experience in Jamaica.

I was a guest of a lovely little inn, run by two wonderful women in Jamaica. As part of their business they offered guests unique ‘one of a kind’ Jamaican experiences. There was a new tour, run by a eco-nature outfit, they wanted to check out before promoting it to their guests and asked me if I wanted to come along. It was billed as a ‘leisurely hike’ to a secluded waterfall in the Jamaican jungle. 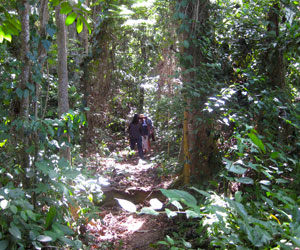 The ‘leisurely’ hike ended up being a two hour grueling trek through the jungle with two Rastafarian guides. The jungle was so thick and impassible, one of the guides, Grantee, had to machete a trail for us. And that was just to get to the waterfall! We left the eco-camp at around 10am and returned late in the afternoon.

Because it was only to be a short hike we only brought one bottle of water each.

Lesson #2 – If you are planning to do any hiking in a Jamaican jungle in May, bring LOTS of water.

I had badly sprained my ankle a couple of days before the hike and so by the time we got to the waterfall, I was done. I was not interested in another 2 hour walk back to our car.

Lesson #3 – If you’ve sprained an ankle, maybe you should forgo any hike in a Jamaican jungle in May. 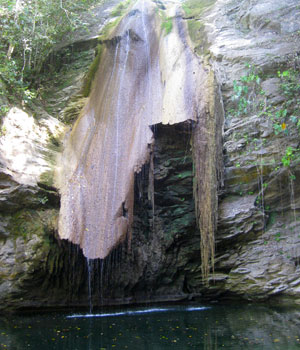 The waterfall itself, the thing they’d been telling us was one of the most spectacular, ‘off the beaten path’ destinations in all of Jamaica was a total disappointment! Because there hadn’t been much rain, the ‘waterfall’ was just a little trickle of moisture falling off a rock into a dark and dank swimming hole. We were not blown away, especially after the long hike to reach the waterfall.

The swimming hole below the waterfall was only accessible by a short but somewhat challenging rappel down a cliff rock face. I was exhausted after the two hour hike, my ankle was not happy with me at all and so I was whining about having to deal with this final challenge before soaking my sweat drenched body in the cool waters below. Grantee was also frustrated with all of us and snapped at me “Get a hold of yourself WOMAN, don’t be so afraid” He refused to help me down the cliff. 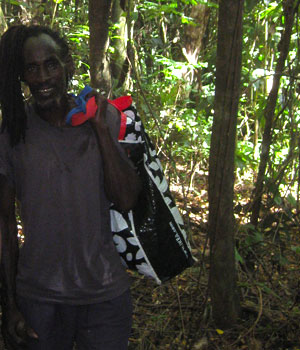 Lesson #4 – Some Rastafarian males are not so patient with women who complain.

I made it down, and sat. I didn’t even have the energy to jump into the water. It took me a while to recover and then I finally slipped into the swimming hole, clothes and all. It was the only blissful moment of the entire trip.

One of the other women was deathly afraid of heights (having fallen off a cliff when she was a child and being seriously injured) and it took her over a half hour of talking, crying and help before she was able to get down to the swimming hole. Grantee ignored her, he was busy making us a lunch.

Lesson #5 – Grantee would not have made a good boy scout.

It was decided that we were NOT going to hike back and while we were having lunch, the 2nd guide (Grantee went home after lunch, he decided he’d had enough) went off to get an ATV that had been parked close to the falls. Since there was 4 of us and one guide, we were all going to take turns walking and ATVing back to civilization. 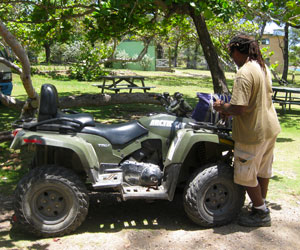 This is where I discovered my ‘I’m going to die’ whimper (never used before or since). The ATV, built for two, now had three passengers: our guide and two tour members. We were driving up and down dry riverbeds filled with huge boulders, many times we had to drive the ATV sideways over the boulders and we were parallel with the ground. My fear was that the ATV was overloaded, and I was pretty convinced it is possible to flip an overloaded ATV, especially if it was already tipped on its side. I started to whimper. A quiet “I’m gonna die” whimper.

About every 5 minutes the driver stopped, let us off, and went to get the other two in our party. After a few of these ATV jaunts, I made a suggestion to the other passenger “lets run!” so we could shorten our time on the ATV. We ran. Or should I say, hobbled quickly down the overgrown jungle path. 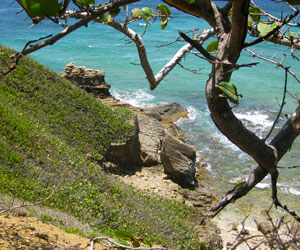 The last straw happened close to the end of the journey. The owner of the ATVs had jerry rigged a small road midway along the side of a huge cliff overlooking a rocky beach, and we had to take this road to get back to the cars. We had walked it that morning and even walking on the road was scary. There was no barrier between the crumbling cement and the rocky beach 50 feet below us. Now, I’m faced with the joy of experiencing it on an ATV that barely fit on this flimsy road. Then I spotted, half way along the road, a huge boulder jutting out of the side of the cliff, “there’s no way the ATV can make it past the rock” I thought to myself. Wrong.

The ATV tipped on its side as it climbed over the boulder. Again we were driving the ATV practically parallel with the road, and there was nothing but air between me and the rocks far below. I looked below me, the waves were splashing happily against the dark, jagged rocks, and the ocean was a beautiful, sparkly turquoise blue. I was convinced that this was the place where I was going to die. At least I picked a lovely spot to do it, I thought to myself. Again, I whimpered my quiet “I’m gonna die’ whimper.

Lesson #6 – If you’re about to do something that you think may end your life, don’t be polite and quiet. Stop and GET OFF the damn ATV!

I didn’t die that day, but as you can see I did learn a few very valuable lessons about travel safety in Jamaica.