I didn’t want to do it. Every fiber of my being was screaming, “NO!” The seemingly vertical drop looked bottomless. But I had no choice… after all, I had a reputation to maintain. I’d already nailed adrenaline stunts like skydiving, hang gliding, and tons of bad-ass roller coasters with ease. So why was a “little” waterslide giving me such heartburn?

It all started with persuading my sister Aimee that we needed to celebrate her 40th birthday with a four-day Carnival cruise to the Bahamas.

“Can you get arrested on a ship?” she asked.

“That’s a very good question,” I replied, wondering what she had in mind.

If our day at sea in transit to the islands was an indication of what the rest of the trip would be like, I was in for a heck of a time. To Aimee, a stranger is just a friend she hasn’t met yet. By nightfall, we had an entourage of “new friends,” following us around as the so-called boring day at sea melted into a very enjoyable day and night with lots of laughs and way too much food.

As we emerged from our stateroom the next morning, New Providence Island beckoned beyond the pier. Having been to Nassau before, we opted to head straight out to Paradise Island to find Cabbage Beach, on my Bucket List since CNN Travel listed it as #6 of the world’s 100 most beautiful beaches. 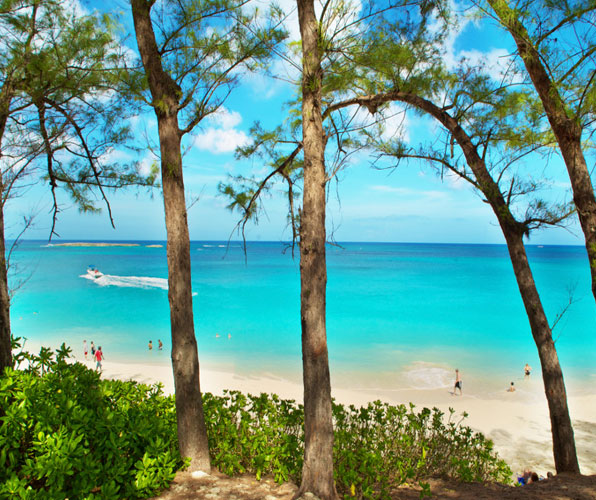 I was not disappointed. I spread my towel and gazed lovingly out at the iridescent aqua water while Aimee scouted for shells. Heaven. Pure heaven. I could have stayed all day. But we had plans…

After a couple of hours at Cabbage Beach we walked to our primary destination – an adventure day at the infamous Atlantis. This megaresort has 11 pools, a water park, 21 restaurants, bars, casino, and a marine habitat.

The Lazy River seemed like a good way to get our feet wet, pun intended. Did I say “Lazy?” It should have been called “Crazy River” as we splashed, bounced and bounded through waves and rapids, laughing through every minute of it! 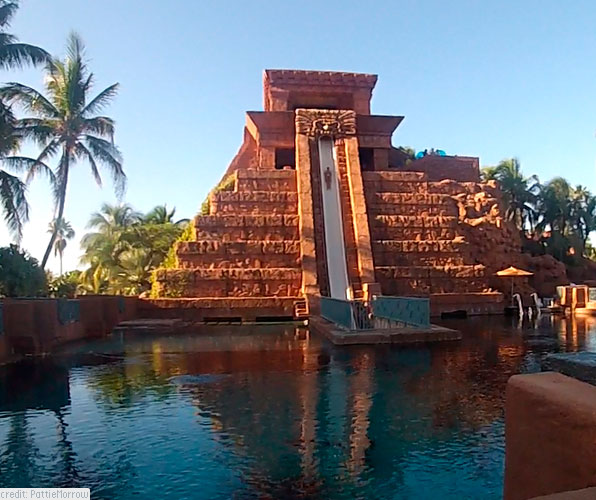 Atlantis is home to the “Leap of Faith” – the waterside I was determined to conquer. This slide which rests atop a replicated Mayan temple is the resort’s signature attraction. After a near-vertical 60-foot drop, you then enter a 100-foot clear acrylic underwater tunnel which runs through a pool stocked with predator sharks. The outside of the pool is also enclosed in acrylic, so visitors are treated to views of terrified “sliders” as they exit the slide only be eyed by the sharks as they pass through the pool. The whole thing is the stuff of nightmares, for most.

But I knew this was an experience I should not miss, so Aimee and I ascended the steps of the Mayan temple. At the top, I was momentarily distracted by the panoramic view of the resort and turquoise ocean beyond.

I took my position, reclined with arms and legs crossed. Aimee turned her GoPro camera on me, I gave her one pitiful look and launched myself into the mouth of the beast.

“She screamed before she even started down the slide,” Aimee said to the guy behind her in line. Not one to lie, I have to admit she was right. I also have to admit I closed my eyes and didn’t even see the sharks as I zoomed through the clear tube before splashing hard into the open part of the pool.

Aimee emerged right after me.

“We did it!” we said in unison, high-fiving each between attempts to remove water from our eyes, ears and noses.

On the other side of the Mayan temple is another slide called the “Serpent” in which you wind through a tunnel seated in an inner tube, in complete darkness, twisting and turning every few seconds before being deposited rather abruptly into in the same shallow pool where you are supposed to quickly jump off the tube and exit before the next person comes splashing down.

Except I couldn’t get out of my tube, no matter how hard I tried. My wet skin made me stick to the tube with my bottom jammed in the middle, until I found a clever way to remove stubbornly-wedged self.

“You ROLLED,” croaked Aimee, who had slid down first and was watching me from the pool deck.

I could hardly understand her, she was laughing so hard she was literally crying.

“That’s the funniest thing I’ve ever seen,” she snorted, collapsing on the ground.

At this point I was contemplating which was worse to endure, the vertical slide or shame of the roll. 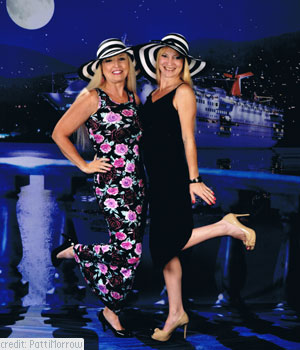 Back on board the cruise ship, I forgot about the roll as we hammed it up with some fun photo ops, feasted, then added new friends to our group and headed to karaoke where Aimee regaled us with her Patsy Cline “Crazy.” Me? Not on your life – I’d had enough humiliation for one day!

Our next and last port was Freeport on Grand Bahama Island, where I found that my intended destination, Xanadu Beach, was now closed due to hurricane damage that had never been repaired. So off we went to Taino Beach, stunningly gorgeous but also very festive with Caribbean and Jamaican music blaring and tropical drinks flowing. We rented beach chairs and an umbrella and spent a tranquil afternoon enjoying each other’s company and laughing about favorite childhood memories.

When it was time to get out of the sun, a short taxi ride took us to Port Lucaya for food and shopping. Conch fritters and an enormous piece of baklava at Zorba’s to sustain… the sustained bargaining in the Marketplace. Doesn’t get any better than that.

Of course, you can never do enough shopping, so the shops near the pier on our return to the cruise ship were hard to resist. As if sensing Cinderella’s clock striking midnight, I said, panicky, to Aimee, “What time is it?” It was 4:30 – we were supposed be back on the ship!

The stories of drunken passengers running to catch the ship crashed uninvited into my consciousness. Of course, we hadn’t had any alcohol, but that didn’t seem to matter as we scrambled all over the pier, trying to find our way to our ship. As we finally crashed through the boardwalk entry, we were hailed by passengers on the top deck of our ship. “Hurry! RUNNNN!” they yelled. I think some of our new friends may have been in that mix.

Yup, we were those girls – the ones who barely made it as the crew was just about to pull up the gangplank. The last ones.

“They wouldn’t have left us?” said Aimee, half statement, half question.

“Our peeps wouldn’t let that happen.” I said. Luckily we didn’t have to find out.

Our last night was filled with more food, more partying, more friends, and more karaoke. Aimee convinced me to sing (I’d never done karaoke before) under the guise that it was her birthday. My rendition of Kelly Clarkson’s “Breakaway” was met with applause and a standing ovation! Who knew?

The disgrace of the roll was long forgotten.

Patti Morrow was born with insatiable wanderlust, eventually following her passion into a successful career as a freelance travel writer and photographer. A self-proclaimed “adrenaline junkie,” she specializes in women’s adventure travel and has traveled throughout most of the United States and more than forty countries abroad. Her byline has appeared in dozens of print and online publications. Follow her adventures at: www.luggageandlipstick.com