It was a long, hard, hot last day in Morocco, in Marrakesh, the pounding heart of the country’s tourism industry.

As I was traveling down the Atlantic Coast, south of Agadir and thoroughly “off the beaten path,” I was giving some serious thought to forgetting about going back to Europe, and spending the rest of my two weeks in Morocco. There was certainly enough to keep me occupied — I didn’t even make it to the Sahara! — and I felt like I’d hit my groove with Morocco. I was getting skilled at traversing the streets, haggling for taxis; I was in love with fresh-squeezed orange juice and mint tea; even my French was improving. We were vibing, Morocco and I, and it seemed a shame to leave so soon. 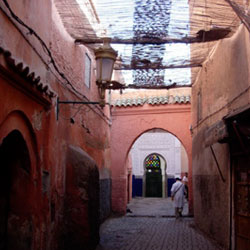 But the prospect of Portugal, Western Europe’s “forgotten” country, combined with a pre-purchased flight and a chance to wash my blue jeans and ditch that filthy blue scarf won out. I arrived in Marrakesh with just one day to soak in the crowning jewel of Morocco’s imperial cities, and its exotic lure.

I’d heard horror stories — travelers and Moroccans alike warned me that Marrakesh’s touts were the toughest, the street harassment the ugliest. I got off the bus from Tiznit suited up in my thickest armor, ready to do battle with a mean look and a linguistic sword of two words: la shokran, no thank you. 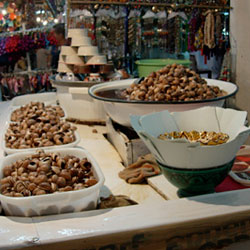 The problem with Marrakesh, or my problem with it, is that people like to touch. I don’t. As my grandma said, I’m “a real touch-me-not.” The men in Marrakesh really see no problem with poking you, grabbing your arm, pressing their bodies against yours, literally tugging you this way and that. I think it’s largely a cultural difference; Moroccans touch a lot, are extremely affectionate with one another, and I don’t think they view touching as the same kind of violation as Americans do. As in, get-your-fucking-hands-off-me, or touch-me-one-more-time-and-I-swear-to-God-I’ll-drop-your-ass-don’t-even-think-I’m-playing.

Not that I ever said either of those. But I thought it. And I suspect the wild-eyed, shocked look I gave the dudes who put their hands on me communicated well my very visceral reaction to unwanted contact. They, in turn, almost seemed offended that I was offended, and got really defensive. It was one of those tough cultural clashes, and I refuse to admit I was in the wrong. Maybe just in the different. 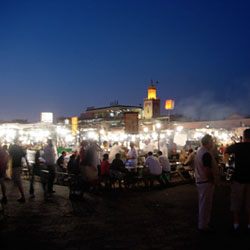 But there was, I have to admit, a kind of magic to the city. I always feel lame saying that about a place that’s really hyped up (as in, yes, Paris is all that). I was intermittently in awe of the city, and frustrated beyond belief.

I stayed near Djemaa el Fna, the open-air market of insanity that really was everything it was cracked up to be. Imagine a county fair. Now add throbbing drums and shrill pipes; snake charmers and witch doctors; wrapped women hunched on plastic stools ready to read fortunes and paint henna. Picture billows of meat smoke, the glare of a thousand gas lamps on a thousand white tarps; see gleaming date stands and pyramided orange juice carts; 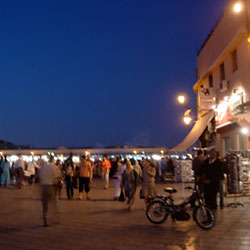 beggars hands and child shoe-shiners. Hear the zoom and honk of motorbikes; feel the buzz of bodies weaving around one another. Wrap it all in a breeze that comes eastward and touches everything, envelops it in one big ball of electric humanity, shakes it up furiously, like a snow globe — and you’re somewhere close.

I meant to treat myself to a fancy last dinner, but when I got to the white-linen restaurant, it felt sterile. I headed down to Djemaa el Fna, stopping to slurp snails at a food stall along the way. I dined on a wooden bench under the white tarps of one of the skewer stalls, watching the multi-lingual touts and hustlers do their business, sometimes rudely, but mostly with a charming panache that was hard to refuse. The breeze blew, and I felt in love with the night, the place, the country.

I thought I’d seal the deal with some chocolate ice-cream. I made my way across the square, nimbly traversing the crowds, not responding to the barrage of “bonjours” keeping my eyes on the prize.

I heard a loud voice rumble, “Hey sweetie!” Though the crowd was thick, I had that prickly back-of-the-neck feeling that the call was directed at me. I didn’t look up, kept walking. “Hey sweetcakes!” it yelled again. Still, I kept moving. “It’s okay,” the voice hollered, “I like small boobies.”

I whipped my head around and saw a reddened face laughing, jowls shaking in a grotesque mask of amusement. Other faces were turned to look at me and my shawl-covered chest (I mean, come on, a B-cup is not that small). My cheeks flushed; I muttered “piece of shit” and stormed away, trying to lose myself in the throngs.

The face hadn’t been a teenager’s, but a grown man’s, which angered me more. It had seemed quite pleased that it had humiliated me, that other people had noticed and looked. I felt the blood in my body burning with frustration.

A well-dressed man sidled up next to me, holding a clipboard and a perky straw hat. I looked forward, didn’t acknowledge him. “That man,” he said to me, “you can’t get angry. You just have to accept and —” out of the corner of my eye, I saw him make a brushing-off gesture.

I sighed, not entirely sure of this man’s intentions, and not in the mood to risk it. “I know,” I respond. “But sometimes I get tired of accepting, of always being the one to have to accept.” I could feel hot tears in the corners of my eyes.

“Where are you from?” the man asked. I eyed him cautiously, as the question was usually a prelude to some kind of hustle. “The US.”

“Ah, welcome,” he nodded thoughtfully. He leaned forward, said softly, “Of all the things you remember, of all the things you take home, don’t take that.” He nodded again. “I’m sorry.” He paused, let the words and the sentiment linger there in the charged air for a moment, turned and was gone, swallowed into the crowd.

It was all a little too much for me, the intensity of extremes — the degradation, the laughing face, the twisted soul-sickness that makes someone humiliate another person — and now, such thoughtful tenderness. All of it from strangers, all of it strange, somehow finding me in the immensity of the crowd. The whole day had felt like that, a tugging between two places, between two sentiments, of both loving and hating a place.

I was exhausted. I decided not to fight it, not to try to be tough anymore. I went back to my hotel room and sobbed, for the overwhelming kindness and cruelness of it all. For being a woman, for being a person, in a place, a world, that is simultaneously horrifying and beautiful.