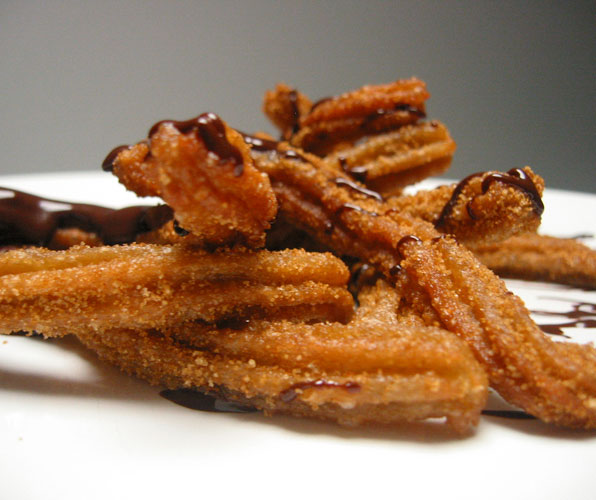 We love this recipe from Ruben Ortega, a native of Puebla and the pastry chef at Hugo’s in Houston, Texas, it is so easy to make and so very good. We dare you to only have one!

Bring the butter, salt, vanilla, cinnamon, and 2 ¼ cups water to a boil in a saucepan over medium-high heat. Remove and discard cinnamon (or add in ground cinnamon), and add flour. Stirring constantly with a wooden spoon, cook until a smooth dough forms, about 5 minutes. Transfer dough to a bowl, and add egg; stir vigorously until dough is smooth. Transfer dough to a piping bag fitted with star tip and set aside. Meanwhile, combine sugar and ground cinnamon in a brown paper bag.

Fill a large pot until it has about a 2 inch depth of canola oil. Heat the oil on medium-high until it reaches 400 degrees. If you don’t have an oil thermometer, place a wooden spoon in the oil, once you see fine bubbles around the spoon your oil is ready. Toss a test mini churro in and it should bubble vigorously, if not adjust temperature slightly higher.

Once the oil is hot enough, pipe the churro dough in a fairly straight line in the oil. You don’t want to crowd the churros or else they won’t cook properly. Fry the churros in batches of 4 six-inch long churros in a large pot or pan. Turn churros often, until they’re golden brown, about 2 minutes each. If churros are brown on the outside but still raw inside, your oil is too hot, turn down slightly and you’ll have perfectly cooked pieces of yumminess!

Drain them briefly on paper towel, then shake in the bag with the cinnamon sugar mixture until they are well covered.

We discovered this recipe for Mexican Chocolate Ganache when drooling over the wine choices at La Crema Winery in Sonoma. We think a glass of heavenly La Crema wine, accompanied with one or two or three churros drizzled with the following chocolate ganache deliciously decadent!

Heat the heavy cream in a small pot until it is just bubbling.

Add other ingredients in a medium-sized, heavy bowl.

Add heavy cream to other ingredients, and let it set for a moment.

Whisk ingredients together until creamy and smooth- be careful to not burn yourself on what could be a very hot bowl.