With its rich history, Charleston, SC is ripe for haunted happenings. That’s what we were hoping for, anyway, when my girlfriends and I spent the weekend in the heart of the Low Country.

Our haunted jail tour with Bulldog Tours started at 10 p.m. After checking in at the office on bustling Market Street in the middle of the historic marketplace, we took our map and made our way to the jail. As we walked, the crowds started to thin. Soon, we were the only people on the streets. We joked that the walk to the jail may be as scary than the tour itself. 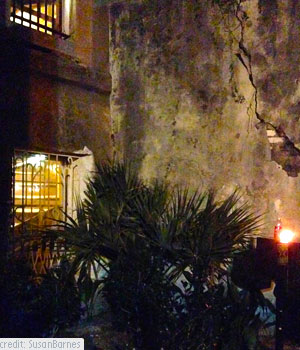 Cory with Bulldog Tours started our tour at the jail’s front door with a brief history of the building, from its first jailer to the 10,000 people who met their demise in the building, and in public forums. Children as young as 11 years old spent time inside, in addition to murderers, pirates and more. The jail stands as it did when its doors closed in 1939.

Inside the jail, the only light was from Cory’s flashlight, which he kept pointed to the ground. As we moved from room to room, he continued with the history and stories of recorded events that had happened between the walls.

While in the octagon, the first room on the tour, it got hot. Very hot. Sure, it was a warm Charleston night, but it was hot in that room. As Cory continued to talk, it got hotter. We could only wonder what made the room so hot. Perhaps the energy in the room? After we (finally) left the room for another, cooler, part of the jail, one of the girls on the tour nearly fainted. As her friends took her outside, Cory explained that her fainting wasn’t an uncommon occurrence: women tend to have physical reactions whilst in the jail – fainting, or even reporting noticeable scratches on shoulders or backs. Creepy!

As we made our way through the jail, Cory’s recounting of stories continued – the ‘gentleman’ who stabbed his wife in the back more than 40 times with an ice pick on their anniversary, and then asked the police what took them so long when they showed at his door. We found out about the jail’s most infamous prisoners, Lavina Fisher, known as America’s first female serial killer, and John, her husband/partner in crime. The couple were both jailed here in 1819 (proclaiming their innocence until the end) for the multiple murder of travellers visiting their inn on the outskirts of Charleston. Another spooky tale was of a man who seemingly enjoyed killing women, and is said to be responsible for the aforementioned scratches.

Outside the “doctor’s office”/mortuary, Cory told us that whenever he tries to go into the room, he feels a slight electric jolt and backs out. No wonder… the jail “doctor” was a criminal himself, admittedly killing inmates. 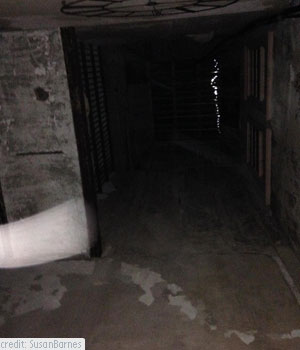 Throughout the tour, I snapped photos in the dark, wondering what might show up in photos. I didn’t expect too much, but you never know… When I looked at my photos on the way back to the hotel, I saw one with a white swoosh that was particularly unnerving. There’s no explanation as to the transparent white wisp that’s going through… other than that I caught something on camera.

After such a fright, it was nice to return to our non-haunted hotel just outside of the historic district. The SpringHill Suites Charleston Downtown/Riverview is bright and cheery, overlooking a marine and marshlands. The hotel offers an evening complimentary shuttle to Charleston’s historic district, making it easy to get to the incredible restaurants, bustling rooftop bars and, of course, haunted happenings that the city has to offer. And in the morning, an amazing breakfast spread is yours to choose from, easily chasing away any ghosts from the night before.

For more ghostly photos of our Haunted Charleston tour check out the slideshow below: 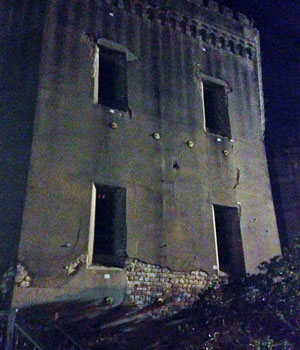 Back entrance of the Charleston Jail. SPOOKY!

3 thoughts on “Haunted Charleston: Our Pick For a Fun Halloween Destination”